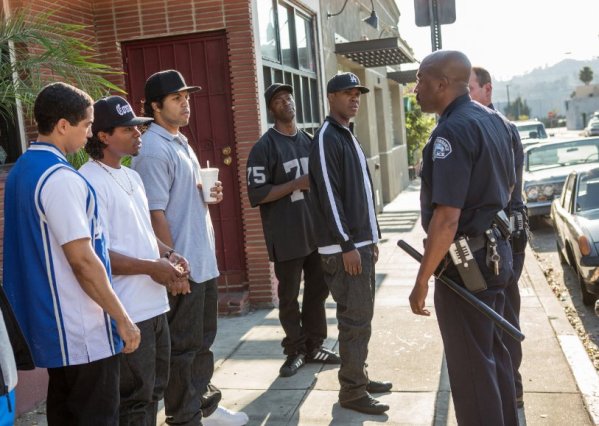 Even if you’re not a huge fan of rap music (I personally like Eminem and Spose, however), chances are that you are going to enjoy Straight Outta Compton. The biopic, directed to near perfection by F. Gary Gary, follows the lives of five men living in the dangerous Southern Los Angeles neighborhood of Compton. O’Shea Jackson a.k.a. Ice Cube (O’Shea Jackson Jr., son of Ice Cube), Eric Wright a.k.a. Eazy-E (Jason Mitchell), Andre Young a.k.a. Dr. Dre (Corey Hawkins), Lorenzo Patterson a.k.a. MC Ren (Aldis Hodge), Antoine Carraby a.k.a. DJ Yen (Neil Brown Jr.) decide to express their frustrations of their hometown in music.

They all form the band N.W.A. (N****s Wit Attitudes) and their first studio album “Straight Outta Compton” becomes a smash record. Studio manager Jerry Heller (Paul Giamatti) helps them get their way out by gaining fame and fortune. Their music gains controversy worldwide. Particularly the cops, in one scene, where they cannot allow the members to perform “F*** tha Police” live because it’s unacceptable language for them. Ice Cube later refers to the first amendment of the Constitution (everyone has freedom of speech). This is a powerful moment given the members are in an era where prejudice still exists. They want to express the truth from their music.

The cast is all-around spot on; I hardly see actors. What I do see are members of N.W.A. becoming famous and going down to the gutter. Paul Giamatti’s Heller is one of his best performances. Despite the long running time, Straight Outta Compton is powerful stuff.