Harley Quinn made her silver-screen debut in 2016’s Suicide Squad. Although far from good, Margot Robbie easily stole the show with her dark, offbeat humor and her insane nature. She was so good that Warner Brothers and DC decided to make a spin-off. Joker and Birds of Prey: And the Fantabulous Emancipation of One Harley Quinn are the only movies in the DCEU to influence the films of Martin Scorsese. The newest entry in the DCEU is miles better than Suicide Squad, but it comes across as disappointing.

After the events of Suicide Squad, Harley Quinn (Robbie) breaks up with the Joker (good riddance). She takes up roller derby and adopts a pet hyena. Meanwhile, a new crime boss arrives in Gotham City in the form of Roman Sionis a.k.a. The Black Mask (Ewan McGregor), who rips faces off of his victims. After putting a target on her back, Harley must join three other vigilantes–Huntress (Mary Elizabeth Winstead), The Black Canary (Jurnee Smollett-Bell), and Renee Montoya (Rosie Perez) to take him down and save a young girl named Cassandra Cain (Ella Jay Basco).

The movie isn’t as awful as one would expect. Robbie still gives a lot of her sassy energy with a rougher edge, even though it looks as if she got her wardrobe at Hot Topic or Spencer’s. However, the supporting characters have a lot more backstory than its protagonist. I particularly enjoy Winstead’s Huntress, who is out for vengeance after dealing with a dark past. Whenever a movie is not entirely good, it’s always great to see McGregor having a blast. This movie is no exception.

Birds of Prey has a similar structure to Deadpool, where it doesn’t shy away from its self-awareness. When it overdoes it, the movie comes across as a little awkward (not to mention the abundance of narration). The pacing is all over the place–ranging from a dark mafia film to a quirky, lighthearted action film with cartoonish violence–which worsens the flow of the narrative. Although there are fun action set pieces (including one set inside a prison), the last act feels anticlimactic. It’s a messy film with bright spots here and there. 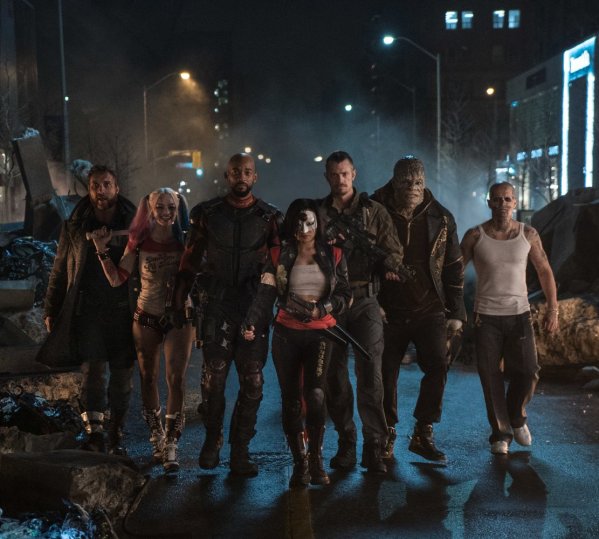 A group of criminals team up to take down an entity in David Ayer’s Suicide Squad (Source: IMDb)

After the disaster known as Batman vs. Superman: Dawn of Justice, I wonder if the DC Extended Universe (starting with the 2013’s decent Man of Steel) will have a good movie for once. DC is remaining on the dark side with Suicide Squad. A great cast playing a group of supervillains under the direction of David Ayer—responsible for writing Training Day and directing End of Watch and the excellent WWII tank flick Fury.

After one year of anticipation, does it hold up? Not necessarily.

Is it better than Batman vs. Superman? You bet! But that’s not saying much.

Amanda Waller (Viola Davis) is the head of an intelligence agency. She and her officials recruit a team of criminals including Deadshot (Will Smith), Harley Quinn (Margot Robbie), Captain Boomerang (Jai Courtney), Killer Croc (Adewale Akinnuoye-Agbaje, a.k.a. Mr. Eko from Lost), among others. They form Task Force X to take down a witch known as Enchantress (Cara Delevingne) from taking over the world (insert Street Fighter reference here). While the Joker (Jared Leto) is on a mission of his own of getting even with his lover, the team must work together to save the world, or else they all get killed.

Suicide Squad has its moments. While every single character is as thin as a piece of paper, the performances are not bad. The only ones I cared for are Deadshot and Harley Quinn, kudos to the performances by Smith and Robbie, who reunite a year after Focus. The soundtrack—featuring the likes of The Rolling Stones, Credence Clearwater Revival, Eminem—is pretty awesome. There is plenty of dark humor sprinkled throughout the 130-minute duration (not surprisingly, this movie is the funniest in the DCEU). While Jared Leto breathes a different life into the Joker, the rest of the movie wouldn’t make a difference if his scenes got cut altogether.

The movie does not save itself from an incoherent script, choppy editing (notably the first act), an obnoxious action-filled finale, plot holes galore, and a lackluster villain (Delevingne’s Enchantress doesn’t look too bad visual-wise, but her purpose is beyond crap). Better luck next year, DC.