Fresh from directing the live-action version of Aladdin, writer-director Guy Ritchie returns to his roots of adult R-rated crime-thrillers. Lock, Stock, and Two Smoking Barrels and Snatch are two from his filmography that have become smash hits in the UK and cult classics in North America. Those films showcase Ritchie as “The British Tarantino”, with his dark wit and unexpected violence. The Gentlemen, his latest film that received modest box-office returns in the U.S., definitely deserves its R-rating, which is laden with profanity, graphic violence, and comedy.

Born in poverty in Texas, Mickey Pearson (Matthew McConaughey) owns the biggest marijuana empire in London while attending Oxford University. If anyone crosses the line, Mickey might put a bullet in their skull. He decides to sell his business to live a happy life with his wife Rosalind (Downton Abbey’s Michelle Dockery, who replaced Kate Beckinsale days after shooting began). This causes a chain of events: from a group of gangsters attempting to get a piece of him to a flamboyant Cockney private detective named Fletcher (a scene-stealing Hugh Grant) investigating the entire situation, typed as a screenplay.

There is plenty to like in Ritchie’s return to adult comic-thrillers. There is enough tension to keep the film afloat. However, the razor-sharp wit and lightning-fast pacing of Ritchie’s writing and directing is what makes The Gentlemen all the more worth it.

The all-star cast, that also includes Colin Farrell, Henry Golding, and Jeremy Strong, has pitch-perfect timing with humor and being badass. McConaughey (who refuses to play roles with any accent other than his native Texas twang) gives enough suave energy wearing a variety of suits and showing off his violent nature. Charlie Hunnam, who worked with Ritchie in King Arthur: Legend of the Sword, has never been better playing Mickey’s right-handed man who does Fletcher a favor of pitching his script. Dockery’s Rosalind is easily the opposite of Lady Mary, who never looked more badass than holding a tiny golden pistol. This movie also serves as a good audition for Golding to potentially be the next James Bond.

The biggest drawback is the conclusion being a mess. Nevertheless, The Gentlemen still has twists, turns, and plenty of dark humor. The constant racial slurs might not be for everyone’s liking, which is understandable. But–there is nothing more than having a good time with a new release so early in the year. I have a feeling this is going to gain a cult following for years to come. 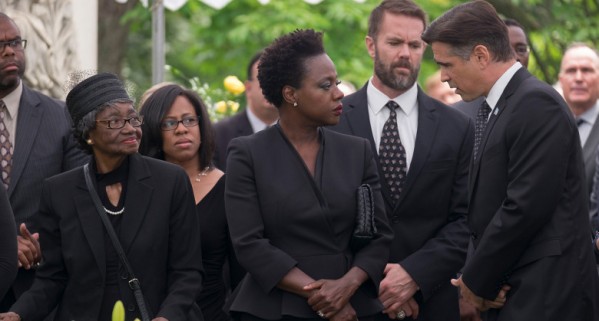 British director Steve McQueen received fame with 2008’s Hunger, about the 1981 hunger strike in a Northern Ireland prison, and the 2011 erotic thriller Shame, which earned a rare NC-17 rating. He would eventually go back in time for the Oscar-winning 2013 film 12 Years a Slave, following Solomon Northup’s fight for freedom in the South during the 1800s. His latest film, Widows, is his first time heading into the mainstream. Co-written by Gillian Flynn (author of Gone Girl), this is a film of female empowerment and betrayal in contemporary America. It’s a revenge thriller, political and human drama wrapped into one exhilarating picture.

Set, like in every great movie, in modern-day Chicago, Harry Rawlings (Liam Neeson) leads a group of criminals to pull off a heist that goes tragically wrong when their van explodes in a safe house. Four widows–Veronica (Viola Davis), Alice (Elizabeth Debicki), Linda (Michelle Rodriguez), and Amanda (Carrie Coon)–are all affected by the accident.

One day, crime boss Jamal Manning (Brian Tyree Henry), who’s running as the alderman for the 18th ward on South Side against Jack Mulligan (Colin Farrell) whose father (Robert Duvall) was once an alderman, enters Veronica’s apartment to tell her about her husband’s next heist that was worth $5 million. He wants her to get part of the money for him to use in his political campaign. With Amanda not present, Veronica stops at nothing when she assigns Alice and Linda to pull off the heist.

I have never seen a movie this year that contained plenty of thrills, authenticity, and sheer poignancy all at the same time. Kudos to the excellent screenplay by Flynn and McQueen (easily one of the year’s best) and Sean Bobbitt’s cinematography, there is not a single wasted moment. Davis leads a terrific cast and gives another miraculous performance as Veronica, a member of the Teachers Union who decides to finish what her husband started. The movie opens up how the four families live their lives prior to the heist–either as an owner of a dress store, a stay-at-home mother with a four-month-old child, or a wife with an abusive mother (Jacki Weaver). Everyone–particularly Duvall, Farrell, Neeson, Debicki (also terrific), Daniel Kaluuya, and Rodriguez–has their big moment.

The audience learns where these three-dimensional characters are coming from as the film progresses. Every bit is just as gripping as it is truly devastating. With Chicago as the backdrop, the movie brilliantly explores the prejudices and the corruption taking place in one of the biggest cities in the world. Containing enough twists and turns, Widows is one of the most unforgettable heist films to come out this century. 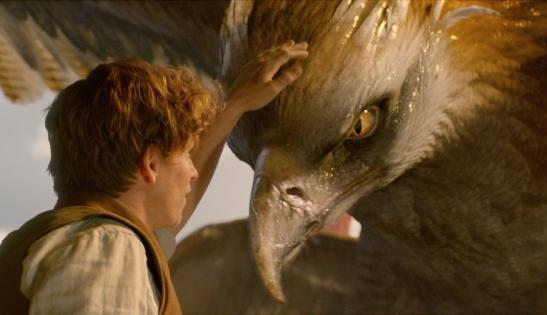 The Thunderbird is one of the many gorgeous creatures Newt Scamander (Eddie Redmayne) has in his suitcase in Fantastic Beasts and Where to Find Them. (Source: New York Daily News)

The world was introduced to Harry Potter in 1997. A special boy with a special power who went to a special school of witchcraft and wizardry. Along with his friends, he must defeat the one who killed his parents when he was a baby. The phenomenon began to spread. Not to mention the films chronicling his seven-year journey as he tries to get rid of the evil Lord Voldemort. Now, J.K. Rowling has written her first screenplay taken place 70 years before our beloved hero goes to Hogwarts. Fantastic Beasts and Where to Find Them brings back the magic while adding something fresh to the table.

Newt Scamander (Eddie Redmayne) is a magizoologist who has finished his global quest to research the many creatures in the magical world. He arrives in New York City with a suitcase filled with magnificent creatures. Since this is 1926, the city is having a conflict between the witches, wizards and the No-Maj population (the American idiom for “muggle”). Percival Graves (Colin Farrell), the head of The Magical Congress for the United States of America (MACUSA), is doing everything he can for the community.

Thinking this might be a quick stop, Newt gets into some risky situations including getting his suitcase misplaced and accidently letting some creatures loose. He joins forces with No-Maj and aspiring baker Jacob Kowalski (Dan Fogler), witch Tina Goldstein (Katherine Wasterston) and her mind-reading sister Queenie (Alison Sudol) to save these creatures before leaving for Arizona.

As a huge Harry Potter fan, I am pleased how Rowling brought the wizarding world to the United States. The ninth entry might have not been good if it relied too much on hinting factors to the other films, or just adapting the textbook written by Rowling (in disguise of Newt). The part of Rowling’s genius as a writer is she makes Fantastic Beasts and Where to Find Them in a world of its own. It’s okay to not see any of the Harry Potter films to get an idea on what’s going on.

Director David Yates feels right at home expanding the Harry Potter universe with James Newton Howard accompanying another fantastic score (with hints of John Williams’ theme sprinkled here and there). Shifting the magic with the history, the dark with the humorous. After being nominated for two Oscars (winning one for The Theory of Everything), Eddie Redmayne was born to be in the Harry Potter universe. In fact, he auditioned to play Tom Riddle in Chamber of Secrets before earning the part of Newt Scamander. Better late than never, I suppose.

Anyhow—Redmayne is certainly having a ball here as Scamander. He is compassionate about his studies. He never gets in the way with his past troubles. He has that professor charm. When he shows Jacob—Fogler, in a hysterical performance—the magical creatures for the first time before his very eyes, he is ecstatic. You know they are in for one wild ride.

Despite the first act being a little clunky, the introduction of the wizard culture to America is quite a treasure! Let’s see where the sequels will go from here.

One of the biggest hits from last year’s Cannes Film Festival, The Lobster is as bizarre as it sounds. Greek director Yorgos Lanthimos crafts something unlike your typical 21st century love story. It is a satire about the restrictions of falling in love in a modernized society.

Set in a dystopian near future, it is against the law to be single. David (Colin Farrell) checks into a gorgeous resort where he is asked a series of questions regards to his sexual preferences. While staying there with his brother (who is, in fact, a dog), he must find a mate in 45 days. What happens if he doesn’t make it? He turns into an animal of his choosing. He chooses to be a lobster because, as he puts it, “they live for over a hundred years, are blue-blooded like aristocrats, and stay fertile all their lives.”

He meets some colorful, off-beat characters including John (Ben Whishaw), who limps, and Robert (John C. Reilly), who has a lisp. It’s not long until David escapes into the woods where he comes across some Loners and their leader (Léa Seydoux). And eventually having an affection for a Short Sighted Woman (Rachel Weisz).

I have never seen anything like The Lobster. Lanthimos allows the audience to think twice about whether love is worth it or not. Through its beautiful and unpleasant scenery, classical music ranging from Beethoven to Benjamin Britten, and character development, it’s almost damn near impossible not to appreciate it. Even though I have no idea how to feel about the film’s final moments, but The Lobster is a film to truly behold. It’s so funny it’s disturbing.