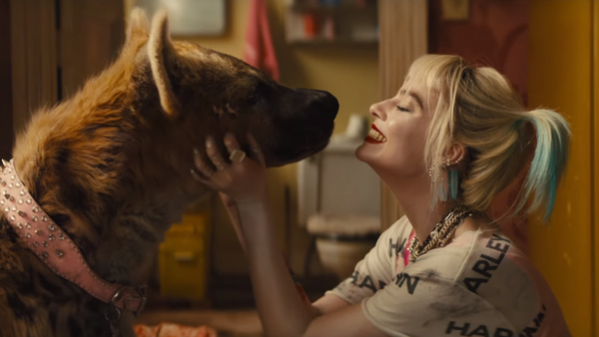 Harley Quinn made her silver-screen debut in 2016’s Suicide Squad. Although far from good, Margot Robbie easily stole the show with her dark, offbeat humor and her insane nature. She was so good that Warner Brothers and DC decided to make a spin-off. Joker and Birds of Prey: And the Fantabulous Emancipation of One Harley Quinn are the only movies in the DCEU to influence the films of Martin Scorsese. The newest entry in the DCEU is miles better than Suicide Squad, but it comes across as disappointing.

After the events of Suicide Squad, Harley Quinn (Robbie) breaks up with the Joker (good riddance). She takes up roller derby and adopts a pet hyena. Meanwhile, a new crime boss arrives in Gotham City in the form of Roman Sionis a.k.a. The Black Mask (Ewan McGregor), who rips faces off of his victims. After putting a target on her back, Harley must join three other vigilantes–Huntress (Mary Elizabeth Winstead), The Black Canary (Jurnee Smollett-Bell), and Renee Montoya (Rosie Perez) to take him down and save a young girl named Cassandra Cain (Ella Jay Basco).

The movie isn’t as awful as one would expect. Robbie still gives a lot of her sassy energy with a rougher edge, even though it looks as if she got her wardrobe at Hot Topic or Spencer’s. However, the supporting characters have a lot more backstory than its protagonist. I particularly enjoy Winstead’s Huntress, who is out for vengeance after dealing with a dark past. Whenever a movie is not entirely good, it’s always great to see McGregor having a blast. This movie is no exception.

Birds of Prey has a similar structure to Deadpool, where it doesn’t shy away from its self-awareness. When it overdoes it, the movie comes across as a little awkward (not to mention the abundance of narration). The pacing is all over the place–ranging from a dark mafia film to a quirky, lighthearted action film with cartoonish violence–which worsens the flow of the narrative. Although there are fun action set pieces (including one set inside a prison), the last act feels anticlimactic. It’s a messy film with bright spots here and there.

Fresh from directing the live-action version of Aladdin, writer-director Guy Ritchie returns to his roots of adult R-rated crime-thrillers. Lock, Stock, and Two Smoking Barrels and Snatch are two from his filmography that have become smash hits in the UK and cult classics in North America. Those films showcase Ritchie as “The British Tarantino”, with his dark wit and unexpected violence. The Gentlemen, his latest film that received modest box-office returns in the U.S., definitely deserves its R-rating, which is laden with profanity, graphic violence, and comedy.

Born in poverty in Texas, Mickey Pearson (Matthew McConaughey) owns the biggest marijuana empire in London while attending Oxford University. If anyone crosses the line, Mickey might put a bullet in their skull. He decides to sell his business to live a happy life with his wife Rosalind (Downton Abbey’s Michelle Dockery, who replaced Kate Beckinsale days after shooting began). This causes a chain of events: from a group of gangsters attempting to get a piece of him to a flamboyant Cockney private detective named Fletcher (a scene-stealing Hugh Grant) investigating the entire situation, typed as a screenplay.

There is plenty to like in Ritchie’s return to adult comic-thrillers. There is enough tension to keep the film afloat. However, the razor-sharp wit and lightning-fast pacing of Ritchie’s writing and directing is what makes The Gentlemen all the more worth it.

The all-star cast, that also includes Colin Farrell, Henry Golding, and Jeremy Strong, has pitch-perfect timing with humor and being badass. McConaughey (who refuses to play roles with any accent other than his native Texas twang) gives enough suave energy wearing a variety of suits and showing off his violent nature. Charlie Hunnam, who worked with Ritchie in King Arthur: Legend of the Sword, has never been better playing Mickey’s right-handed man who does Fletcher a favor of pitching his script. Dockery’s Rosalind is easily the opposite of Lady Mary, who never looked more badass than holding a tiny golden pistol. This movie also serves as a good audition for Golding to potentially be the next James Bond.

The biggest drawback is the conclusion being a mess. Nevertheless, The Gentlemen still has twists, turns, and plenty of dark humor. The constant racial slurs might not be for everyone’s liking, which is understandable. But–there is nothing more than having a good time with a new release so early in the year. I have a feeling this is going to gain a cult following for years to come.