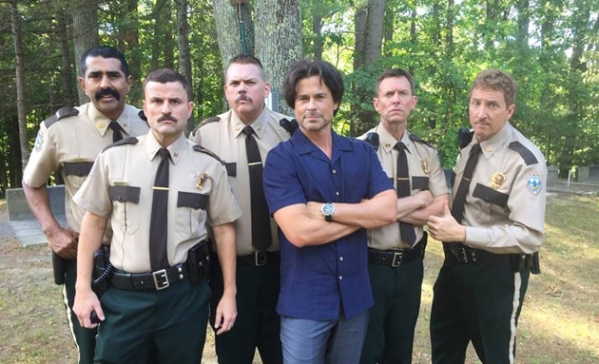 10. Super Troopers 2 (2018) – One thing I will never understand is why it took so long for a sequel to hit theaters 17 years after its predecessor. I’m one of the only people who didn’t care for the first film. There are a few funny scenes, but it didn’t make me laugh much. The characters are too moronic to even root for and the jokes fall flat on their face. It would have been fine if a sequel came out in 2005 or 2006. It feels a little outdated for 2018. The sequel recycles some of the same jokes from the previous film, except they are not funny in the slightest. It has a mystery I can see coming a mile away.

9. Yoga Hosers (2016) – If you thought Tusk was bad, you haven’t seen anything yet! Why Kevin Smith decided to make a comedy-horror trilogy set in Manitoba is staggering. I wish he would go back to directing such as films as Clerks and Chasing Amy (two movies that are genuinely funny and brutally honest), even though he did return to reprise his role as Silent Bob. Here, he reunites Lily Rose-Depp and Harley Quinn Smith from Tusk, who play two annoying friends who would rather be on their phones and perform in their band rather than working in a convenience store fighting off Nazis in the form of bratwursts. How it’s explained is also ridiculous to make you drive up the wall. Yoga Hosers also contains offensive Canadian stereotypes, terrible jokes and even worse one-liners that will make your jaw drop. You will never hear “O Canada” the same way once the movie is over.

8. The Bounty Hunter (2010) – Anyone remember this “masterpiece” from March of 2010? Sadly, I did. Every day I regret seeing this in theaters. I understand this is supposed to pay homage to the screwball comedies of the past, but there is no good laughs, originality, or chemistry between Jennifer Aniston and Gerard Butler as two ex-lovers playing a little game of cat-and-mouse to make it so.

7. Ghost Rider: Spirit of Vengeance (2012) – If you thought the first Ghost Rider from 2007 was bad, you’re not wrong. But–it did have some enjoyable moments involving the title antihero selling his soul to a demon to save a loved one. And it’s always nice to see Sam Elliott. The sequel, not to anyone’s surprise, is just about as ugly as a Nine Inch Nails music video. Nic Cage does go animalistic as he usually does. Unfortunately, it’s ruined by awful directing by Mark Neveldine and Brian Taylor (of the terrible Crank), bizarre editing, and obnoxious action. The effects are some of the worst I’ve ever seen.

6. Hellboy (2019) – Guillermo del Toro’s films are thrilling, entertaining, and downright magical. They showcase Ron Perlman in a role he was born to play; a half-human, half-Nazi demon with a big appetite and a soft side for cats. There’s none of those qualities in Neil Marshall’s R-rated reboot. David Harbour would have been a decent choice for the title role if he received a good script. Instead, he comes across as whiny and arrogant who delivers terrible one-liners. The film plays out as a rip-off to the 2017 version of The Mummy, instead it’s even more incomprehensible, obnoxious, and downright gross.

5. Paul Blart: Mall Cop 2 (2015) – I have to admit, the first film from 2009 was certainly no masterpiece, but it did have its moments. Kevin James is a talented comedic actor who always plays such horrible roles. Paul Blart: Mall Cop 2 is a comedy sequel devoid of any good thrills or laughs. How can a scene involving our protagonist fighting with a peacock be downright hilarious is beyond me. I gave up within the first five minutes of this garbage.

4. Nine Lives (2016) – A movie starring Kevin Spacey whose soul is put inside a cat sounds like something you would see on Funny or Die. Sadly, this is a real Hollywood movie directed by Barry Sonnenfeld (of Men in Black fame) that plays as a rip-off to The Shaggy Dog. I feel so bad for everyone involved with this puddle of cat pee. It looked like Spacey did not want to take any part of this movie at all (at one point, I kid you not, when he is given a bath as a cat, he says,“Just drown me”). The movie never tries to be funny. The CGI look like something you would see in a made-for-TV movie. The business talk would not only bore kids to death, it would easily bore adults as well.

3. The Bye Bye Man (2017) – I have never seen a worse horror movie than The Bye Bye Man. This contains the typical qualities of terrible horror filmmaking. It contains cheap scares, annoying characters who make the stupidest of decisions, abysmal editing, and hilariously bad deaths. No one has any idea who this “Bye Bye Man” truly is, besides having a computer-generated dog by his side to scare its victims and being involved in a train accident. Don’t even bother if you are beyond curious.

2. Jack and Jill (2011) – Poor Adam Sandler. He is one of the most talented personalities in Hollywood. From getting his start on SNL to starring in funny comedies such as Billy Madison and Happy Gilmore to proving he can act in dramatic films such as Punch-Drunk Love, Reign Over Me, and The Meyerowitz Stories (New and Selected). This comedy, in which it swept every single award in the 2011 Razzies including Worst Picture and Worst Actor, will forever live in infamy.

It’s amazing how excruciatingly unfunny Jack and Jill truly is. Not a single gag works (hell, even some of the humor is a little crude for a PG-rating), there are no characters to root for (Jill is probably the most annoying character Sandler has ever played), and the amount of product placement is so ridiculous it almost feels like a 90-minute long Super Bowl commercial. I don’t want to know what went through Al Pacino’s head when he signed on to do this mess. Pacino perfectly sums the movie up in the end when he tells Sandler, “Burn this. This must never be seen…by anyone.”

1. Movie 43 (2013) – Calling this anthology film the worst movie of the decade is an understatement. This is perhaps the worst movie I have ever seen in my entire life. It’s quite an achievement how a movie such as Movie 43 did not make me laugh once. The massive ensemble does NOTHING to save this disaster. The sketches are, more or less, one-joke concepts containing lazy toilet humor. For instance, the first sketch involves Kate Winslet going out with Hugh Jackman who has a scrotum dangling from his chin. If you thought that sounded bad, it just gets worse from there. From Liev Schreiber and Naomi Watts playing parents humiliating their homeschooled son to Halle Berry and Stephen Merchant playing a game of “Truth or Dare” that gets really ugly really fast to a Flash-cartoon creation of a cat masturbating to his owner’s photo album, this is absolutely painful to watch. There has never been a movie that made me feel more infuriated, disgusted, and easily offended than this movie. Richard Roeper perfectly described it as “The Citizen Kane of awful”. I am so glad George Clooney quickly backed out when producer Peter Farrelly offered him a role as a fictional version of himself failing to pick up women. Stay far away from Movie 43 as you can!

I hope you enjoyed reading about what I have to say about the movies I hated with a burning passion as much as I did tearing them to pieces. Hopefully, I will never see or hear about any of these movies again for the rest of my life. If you want to leave comments about the worst movies of this decade, don’t hesitate to do so. Tune in after Christmas for my top 100 best movies of the decade.