Saraya (Florence Pugh) and Zak (Jack Lowden) are about to pursue their dreams of being pro wrestlers in Stephen Merchant’s biopic Fighting with My Family. (Source: Variety)

On paper, a movie like Fighting with My Family sounds like your basic, generic biopic. After the success of Rocky, movies featuring boxing or wrestling follow the same formula. Creed, Million Dollar Baby, Southpaw, Warrior, among others, all work due to the great writing and characters that audiences care and root for until the end. Fresh from creating The Marine franchise, WWE studios finally step up their A-game with Stephen Merchant’s directorial debut, in which he also produced and wrote the screenplay.

Saraya Knight (Florence Pugh) is an 18-year-old living with her parents–Rick (Nick Frost) and Julia (Lena Heady)–who are former wrestlers. Sporting a lip ring, she and her brother Zak (Jack Lowden, Dunkirk) train aspiring wrestlers at a local gym. The family is struggling financially. The parents decide to call Hutch Morgan (Vince Vaughn) about having their children try out for the WWE. Saraya earns the ring name “Paige”, after a character in her favorite television show Charmed. She eventually makes it while learning to persevere in this new environment.

Yes–the movie might be predictable and formulaic, but Merchant does an impressive job balancing comedy and family drama with the roughness of the wrestling world. Pugh is an absolute revelation, whose portrayal of Paige is someone who never loses the support of her family as she dreams of being a pro wrestler, ever since she was a child. She might struggle at first, but we watch her as she never backs down. This is a star in the making.

Frost and Dwayne Johnson are riotous hoots, particularly when they take part in hilarious exchanges over the phone in one scene. Merchant makes a brief yet funny appearance as the father of Zak’s girlfriend. Vaughn’s performance as Coach Morgan reminds one of his performance as the drill sergeant in Hacksaw Ridge, providing laughs and the tough attitude.

Fighting with My Family is one of the first surprises of the new year. Even if you’re a fan of wrestling or not, it’s hard not to stand up and cheer for our heroine as she takes part in brutal wrestling training and matches (as one would expect in a movie like this). This is also the perfect film to watch with the whole family. The first truly great movie of 2019. 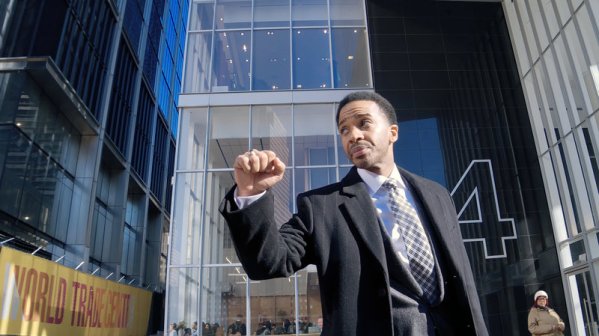 Director Steven Soderbergh has returned to the director’s chair in 2017 with Logan Lucky, an overlooked redneck version of his 2001 film Ocean’s Eleven. Last year, he brought forth Unsane, an allegory of the Me Too movement. It became his first movie to be shot on an iPhone. While I didn’t particularly care for the movie, Soderbergh did a decent-enough job giving his cinematography (using his alias Peter Andrews) a claustrophobic feel. For his latest Netflix film, High Flying Bird, the talented filmmaker (who also writes and edits his films) decided to take a different approach with his camerawork. He wanted a much crisper look with the anamorphic lens. It’s so good Soderbergh is back!

Set during the course of a lockout by the National Basketball Association, Ray Burke (André Holland, Moonlight) is a sports agent struggling to get his players paid for playing the game. One of his clients is Erick Scott (newcomer Melvin Gregg), who just got drafted by a New York team (keep in mind, the characters never mention the teams by name). His boss David (Zachary Quinto) tells Ray that his bank accounts and credit cards have been frozen through the duration of the lockout, unless Ray can come up with a solution to end the lockout once and for all. Then, he comes up with a plan that would test the entire NBA.

Writer Tarell Alvin McCraney mixes the narrative with interviews with actual basketball players Reggie Jackson (no, not THE Reggie Jackson), Karl-Anthony Towns, and Donovan Mitchell talking about the thrill of the game. It is dialogue-driven, which will throw off a lot of casual viewers. The dialogue is part of what makes High Flying Bird shine. It’s as sharp as a clean razor. It’s better not knowing too much about it before going in. The subject on race and power off the court sticks with you once the credits begin to roll.

Holland is straight-up perfect for this material, playing an agent who striving to have his rookie player earn money. One day, he gives him a package containing a “Bible”, which will come in use to him at some point. However, he is shocked to learn that he used a loan without his consent and going at it with a teammate on social media. The real scene-stealer is Bill Duke as Spence Jones, the coach for a youth basketball program in the Bronx who happens to be Ray’s trusted friend. Whenever he hears about slavery, he gets ticked off. “I love the Lord and all His black people,” he says.

Soderbergh does a great job using this cheap filmmaking technology with a clever variety of angles and techniques. I’ll definitely have to watch it again, but there is a lot to like here.

Elio (Timothée Chalamet) and Oliver (Armie Hammer) develop a beautiful friendship in Call Me by Your Name. (Source: Taste of Cinema)

Movies containing gay relationships are a mixed bag. If the movies handle the subject with care (i.e. Brokeback Mountain and Moonlight), they result in being poignant movies. If the subject is being exploited, they tend to be insensitive, disgraceful, and have the characters being portrayed as stereotypes. Only a few great filmmakers would put so much authenticity into their direction and their character development.

Italian director Luca Guadagnino (who is gay) is known for casting Tilda Swinton in his movies. Ten years after his feature debut, The Protagonists (1999), he became a household name when he directed the 2009 film I Am Love, which premiered at the Venice Film Festival of that year. A Bigger Splash (2016) was a good-ol’ time being around four people spending vacation in Sicily, from its gorgeous scenery to the erotic, sensual nature of its characters. Recently, he took charge in expanding the scary world of the Suspiria remake, by making it an hour longer than its original. However, it didn’t receive a warm reception, compared to his previous films. He would join screenwriter James Ivory to give his native country a brand new light in his 2017 film, based on a novel by Andre Aciman.

Nominated for 4 Oscars including Best Picture (with Ivory winning Best Adapted Screenplay), Call Me by Your Name is more than just a gay love story. It’s a coming-of-age story about the struggles of identifying oneself. It makes us wonder why we don’t get movies like this.

It’s the summer of 1983. 17-year-old Elio Perlman (Timothée Chalamet) is spending a quiet summer with his parents (Amira Casar and Michael Stuhlbarg) in a village in Northern Italy. He spends most of his time reading books and listening/transcribing classical music. Unlike Chiron in Moonlight, Elio is living in his own perfect world, but he is trying to come to terms with his adolescence.

One day, he meets a ravishingly handsome college student from New England named Oliver (Armie Hammer), who is 24 years old. He arrives in Italy to assist Elio’s father, a professor of archaeology, with his paperwork. Although he is in a relationship with a French girl named Marzia (Esther Garrel), Elio becomes increasingly attracted to Oliver each day. They spend the first act teasing and flirting with each other until their friendship begins to change their lives forever.

Every single shot in this movie is nothing short of breathtaking; you can smell the grass as Elio and Oliver ride their bikes through the countryside or as they lie down to get some sun after having a quick swim. There’s a scene where Elio plays a piece of music by Bach (in three different versions) on the piano for Oliver. Kudos to Guadagnino’s smooth direction and Sayombhu Mukdeeprom’s stunning cinematography, the camera never cuts after each version he plays. With the focus going back-and-forth between Elio’s piano-playing and Oliver’s reactions, it gives the viewer the impression that sparks are about to fly.

The age-gap between the main characters might throw viewers off a bit. However, the age of consent in Italy was–and still is–14. The movie never suggests anything about molestation. The story about first love and desire contains a mature protagonist at its center, who is aware of his own surroundings and loves to explore. Hell, even his parents never look down his son, and they are always there for him whenever he needs a shoulder a cry on. The French story, in which the mother reads in one scene, asks the question, “Is it better to speak, or to die?”

It does take a lot of time knowing our star-crossed lovers, but everything about the movie works, due to–most importantly–the astounding performances by Chalamet and Hammer. I cannot imagine a perfect pair than these two great actors, who got along so well before, during and after making the movie. Their emotions are so raw, it makes it feel as if they are portraying actual people who love each other and embark on one helluva journey. After gaining indie stardom in Miss Stevens and Lady Bird, Chalamet is simply perfect as Elio, who, at first, has doubts about Oliver, particularly when he asks his parents if it’s arrogant whenever he says “Later”. Then, Elio puts Oliver’s red shorts around his head; foreshadowing their lust for one another.

He finds out they have one thing in common: they’re Jewish. One day, he sees Oliver wearing a necklace with the Star of David pendant. It begins to show that Oliver is not ashamed of who he truly is. Elio tells him that he and his family are only “Jews of discretion.” Eventually, we see Elio wear the exact same necklace and him celebrating Hanukkah with his parents. He shares the same feelings Oliver has. They become so attracted by each other’s statuesque appearances (notice the images of Ancient Greece) the same way their secrecy–with his religious beliefs and Oliver’s sexuality–brings the two together. When they walk around a World War I statue (representing a barrier for the two lovebirds), it becomes clear how hard it would be for them to leave each other’s side.

While the performances are superb, it shocks me, to this day, how Stuhlbarg hardly received any award recognition. Particularly his monologue near the end is enough to make cold-hearted people weep. He tells his son he would never have what he and Oliver had. “How you live your life is your business,” he says. “Just remember, our hearts and our bodies are given to us only once. And before you know it, your heart is worn out. And, as for your body, there comes a point when no one looks at it, much less wants to come near it.” The writing by Ivory is simply marvelous!

Call Me by Your Name is one of the most beautiful love stories ever captured on film. Thankfully, everyone will get to see more of how the relationship between Elio and Oliver has evolved in a sequel coming in 2020, following the tradition of Richard Linklater’s Before trilogy. It will capture the era where HIV/AIDS is becoming more perceptible. Who knows if it will be as powerful as its predecessor, but Guadagnino sums up this movie perfectly, in an interview with The Guardian: “[This movie] encompasses what I’ve found striking about life: that you can be a better person, and you can build a bridge to go and meet new people instead of confining yourself within your own boundaries.”