Ethan Hunt (Tom Cruise) climbs the tallest building in the world in “Mission: Impossible – Ghost Protocol”. Yes, Tom Cruise did his own stunts.

Brad Bird, known for his work for The Incredibles and Ratatouille, gives an impressive live-action debut with Mission: Impossible – Ghost Protocol. He literally brings the series to a whole new level.

After escaping from a Moscow prison, Ethan Hunt (Tom Cruise) joins his new team of IMF agents – field agent Benji Dunn (Simon Pegg), analyst William Brandt (Jeremy Renner), and agent Jane Carter (Paula Patton) – to stop Kurt Hendricks (Michael Nyqvist), a Swedish nuclear activist. They enter the Kremlin. Hunt and Dunn hide behind a projector in a hallway to find the archives of Hendricks. Halfway through the mission, a bomb destroys the Kremlin. Hunt is accused of the attack. The President initiates “Ghost Protocol”, which allows the IMF to be disavowed. In order to clear their name, they must track down Hendricks to prevent him from starting a nuclear war.

Out of all of the movies, Ghost Protocol is easily the funniest, the most exciting, and the most entertaining. The scenes in which Hunt climbs the Burj Khalifa (“Your line’s not long enough!” “No shit!”) and chases Hendricks through a sandstorm are action-movie gold. It’s insane how Tom Cruise can do what no other actor can do: performing stunts. Throughout the series, Cruise performed most, if not, all of his own stunts. He’s probably the best action hero. His chemistry with his teammates are excellent, especially with Simon Pegg who have some really funny parts together. The characters have some great back-stories.

This movie actually proves how impossible the mission can be. For instance, when Hunt wears a special type of gloves that can stick to any surface. When the light shines blue, it sticks (Blue = Glue; Red = Dead). His gloves start to malfunction. It makes the scene all the more suspenseful. Mission: Impossible – Ghost Protocol is, in my opinion, the best of the series.

Now we’re back on the right track with Mission: Impossible III. J.J. Abrams brings the series back into its full glory with actual spy stuff.

Retired from the IMF, Ethan Hunt (Tom Cruise) is now married to Julia (Michelle Monaghan). However, he gets assigned by John Musgrave (Billy Crudup) to save IMF trainee Lindsey Ferris (Keri Russell). She has been kidnapped by an evil arms dealer named Owen Davien (the late Phillip Seymour Hoffman). Once Ethan and his team – his old pal Luther Stickell (Ving Rhames), Declan Gormley (Jonathan Rhys Meyers), Zhen Lei (Maggie Q) – save Lindsey, a tiny bomb that is implanted into her skull detonates. When the team abducts Davien in the Vatican, he mentions a nuclear device called the Rabbit’s Foot. Then, Davien escapes and captures Julia, which leads them all the way to Shanghai. For his theatrical debut, Abrams knows what made Mission: Impossible a great movie. Ethan Hunt, again wonderfully played by Cruise, going back to be the spy he used to be, not a 007-esque playboy. Hoffman is an excellent villain, even though there is minimal background of his character. The action, especially on the bridge, is suspenseful. Everything looks real. The series seems to be getting better and better!

Take out the brains, the mystery, the wit. And add in some over-the-top fun. You get Mission: Impossible II, directed by John Woo.

We introduce Ethan Hunt (Tom Cruise) rock climbing in Utah. His mission is to destroy a deadly virus called “Chimera”. Meanwhile, a group of terrorists led by Sean Ambrose (Dougray Scott) are after the virus so they can get rich for infecting the world. He relies on his fellow hacker Luther Stickell (Ving Rhames) and international thief Nyah Nordoff-Hall (Thandie Newton) for help. Since there is a cure called “Bellerophon”, Hunt must get rid of “Chimera”. All this leads to an awesome action-packed finale. Mission: Impossible II isn’t necessarily a spy film rather than a straight-forward action flick. This is definitely a John Woo movie. We have slow-mos, doves, and handguns. This is also more of a James Bond movie. Instead of a slick, sophisticated spy, Ethan Hunt is more of a playboy. There are times where the movie becomes too silly. Nevertheless, it’s a fun movie.

One of the rarest qualities in any summer blockbuster is to allow the audience used their brains. That is the case for Brian De Palma’s 1996 adaptation of the TV show Mission: Impossible. Tom Cruise stars in a compelling performance as Ethan Hunt, a sophisticated spy for the IMF (Impossible Mission Force). He and his fellow teammates are assigned by Jim Phelps (Jon Voight) to retrieve a cover list in Prague. The mission goes horribly wrong. Ethan goes on the run as a fugitive, and he gets help from computer hacker Luther Stickell (Ving Rhames) and helicopter pilot Franz Kreiger (Jean Reno) to prove his innocence. As he goes on this seemingly impossible mission, mysteries behind the failed mission begin to unravel. Featuring exciting missions, great action (the scene on top of the train), and excellent performances, Mission: Impossible might be too complex. But it’s still a fun ride. That scene in the vault of the CIA building is freaking tense! 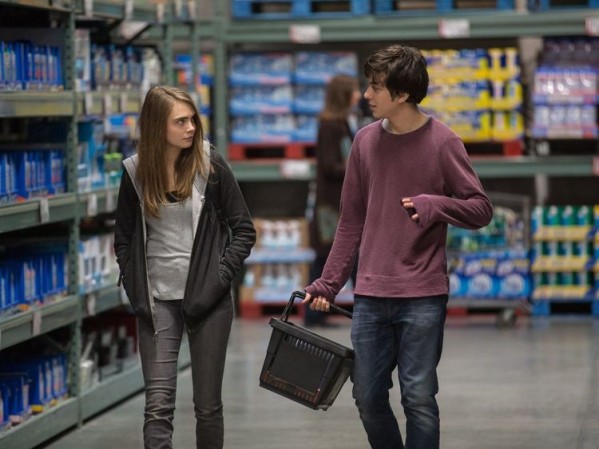 Paper Towns is one of those books that I could never put down. During the five days of reading it, I immediately got right into the mystery and the characters that John Green has created. I loved every bit of this funny, thoughtful, and simply moving book. Being named as one of TIME’s 100 most influential people, Green seems to be young-at-heart. He writes his teenage protagonists as if they are really teenagers (the way they talk and interact with one another). With The Fault in our Stars being one of 2014’s big hits, Paper Towns has been adapted into an insightful (even though not a perfect) movie. Seeing this last night was like I went on quite an unforgettable road trip. Director Jake Schreier delivers enough laughs and drama to go along with the mystery.

Everyone believes in miracles. For Quentin Jacobsen (Nat Wolff), his miracle was different. He has a crush on his mysterious next-door neighbor Margo Roth Spiegelman (Cara Delevegne, in a stand-out performance). The movie opens with them at nine years old. They see a dead body, and they decide to investigate it. “She loved mysteries so much, she became one,” Q narrates.

Years later, they are seniors in high school. The popular Margo and the not-so-popular Q ignore each other. Until one night Margo sneaks into his bedroom window, and asks him to help plot revenge on some of her friends including Jase Worthington (Griffin Freeman), her boyfriend who has cheated on her. He accepts, and they spend the entire night together plotting revenge. And they end their night sharing a dance on the top floor of the SunTrust Building in Orlando. The next day, Q realized that Margo has disappeared. With prom and graduation coming up, he sets out to look for Margo by following clues she left behind.

For those of you who liked The Fault in our Stars, don’t go into Paper Towns expecting it to be a tearjerker. It’s the exact opposite. There are several differences between the movie and book (a movie is a movie while a book is a book). It never shies away the moral of chasing what you truly desire. It might not be the most original film of its type, but I don’t care. What matters is the audiences sympathizes with Q and his friends Ben and Radar (Austin Abrams and Justice Smith; providing the film’s most hilarious moments). It hits a few bumps in the road, but I enjoyed being a part of the journey.

Ant-Man is the final film in the second phase of Marvel’s Cinematic Universe. I gotta admit, this is a fun send-off. It centers on Scott Lang (Paul Rudd), a criminal who has just escaped from prison. With the help from scientist Dr. Hank Pym (Michael Douglas), he puts on a suit with a power to shrink in size but increase in strength. As Ant-Man, Lang, with the help of his teammates–Luis (a scene-stealing Michael Peña), Dave (T.I.), and Kurt (Dave Dastmalchian)–tries to pull off a heist involving Darren Cross (Corey Stoll) who creates the Yellowjacket suit, similar to the Ant-Man suit. This movie has Edgar Wright’s name written all over it. Despite only being attached as the screenwriter and with Peyton Reed sitting in the director’s chair, Ant-Man provides more laughs than most mainstream comedies, as well as the action, the emotion, and the fun of any superhero movie. Not to mention the effects during the sequences where Lang has shrunk into ant-size are reminiscent to Honey, I Shrunk the Kids. Cannot wait to see how phase three will turn out to be.

Amy Schumer, Bill Hader, and Judd Apatow on the set of “Trainwreck”

Whenever anyone goes into a movie directed by Judd Apatow (The 40-Year-Old Virgin, Knocked Up, Funny People), they know it would come out as raunchy, depressing, and funny. Trainwreck, his latest, is no exception. Ever since she was nine, Amy Townsend (Amy Schumer) has been taught by her dad (Colin Quinn) that monogamy isn’t realistic. In the present day, we see Amy dumping guy after guy, especially Steven (John Cena; “I look like Mark Wahlberg ate Mark Wahlberg.”), partying, and getting high. She lives in a small apartment in New York and working at a men’s magazine. Her assignment is to interview Aaron Connors (the hilarious Bill Hader), a sports medicine doctors working for players including LeBron James (playing a fictional version of himself). They immediately become attracted to each other. But will they ever stay together, or will Amy stick with her father’s advice? With excellent chemistry between Schumer and Hader, countless fast-paced jokes (I’ll see it again eventually), and amusing-as-hell cameos, Trainwreck is the best comedy so far this year.